So we’ve got lots of sea lions here in California – so why  take photos of them “down south”?  Because they are just so darn cute – no matter where they are.  Take a look at this little guy who was hiding behind a little rock on one of the beaches we were snorkeling on – how can you resist that?

It was also apparent that the sea lions considered themselves the kings of the beach – whether we were there or not.  Here is one of the “Royals” overseeing his realm.

And of course, who can resist watching the sea lions play in the lagoons?  Between chasing eachother around, surfing the waves, and generally having a good time, they are always worth paying attention to.  I managed to capture this guy shooting out of the water while attempting a get-away from his (or her) pals… 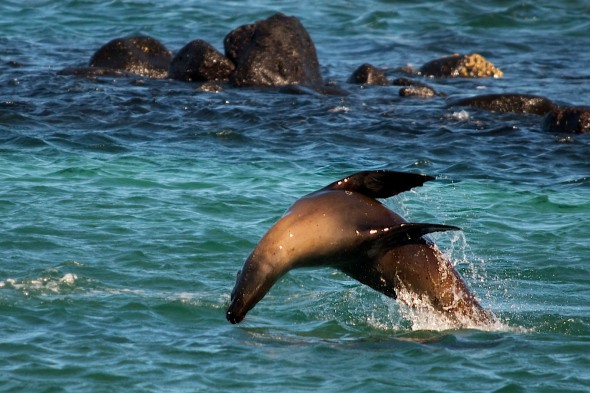 Don't you wish you could be a sea lion for a day?

This entry was posted on July 26, 2011 by scottrandall. It was filed under nature, photography, travel and was tagged with ecuador, Galapagos, galapagos islands, photography, photos, sea lion, south america, wildlife.