Since you may not have gotten a good look at our daughter CJ’s bright blue eyes – here’s another family snapshot.  CJ was a rescue from the Chula Vista pound.  She had obviously been someone else’s pet since she was house broken and in really good shape but somehow she must have lost her way.  She was shaking uncontrollably when we first saw her as the other inhabitants of the pound were mostly pit bulls.  She was a great addition to our family and now rules the roost.  She is mostly a Chihuahua – a type called a blue merle chihuahua – but she obviously has some other lineage going on also…  Anyway, here’s old blue eyes…. 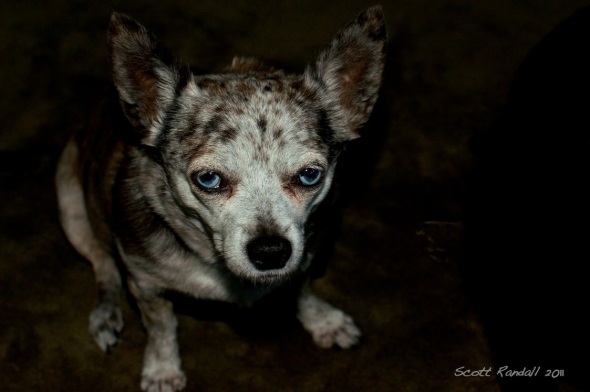 This entry was posted on November 27, 2011 by scottrandall. It was filed under photography and was tagged with chihuahua, dog, photography, photos, san diego.