Weekly Photo Challenge: My 2012 in Pictures

I wouldn’t say that these are my “best” but they are all photos that I love and that capture the local inhabitants of places we went this year.  Happy New Years to all! 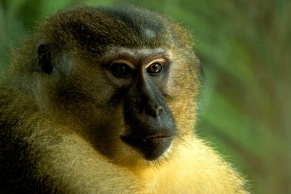 One from near home – the san diego zoo… 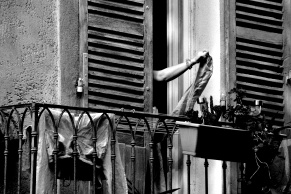 As some of you may know, I try to do only minimal post- processing on my photos.  I normally crop them to my taste, adjust the levels, and maybe sharpen the subject of the photo a little – thats it.  During my trip to New Mexico I had the opportunity to photograph some wild horses with a professional photographer, Lynne Pomeranz (if you’re ever in NM and would like to go see the wild horses, I highly recommend you give her a call).  Anyway, during lunch we went through some of the things that she does for her work to get it ready for commercial galleries.  She is a photoshop user and she also shared some work from a friend of hers who is another great photographer and a certified photoshop expert.  In talking to both of them, I think it is probably time learn how to use more of the postprocessing tools to get the most out of my photos.  All that being said, I probably will still use most of the tools very sparingly.  For the past week or so I’ve been using a trial version of the software and just trying things to see how they work.  You can do some interesting things so I thought I’d share one of my experiments.  One of the things that you can do is “layer” photos on top of each other and pick out specific parts of the photos that you want to remain visible.  Here’s my first experiment with that process – the background of the this photo was a sunset photo of the reserve showing one of the ponds with sandhill cranes resting for the evening.  The foreground was a separate photo of a snow goose landing that I took about two hours before the sunset photo.  I think it makes a nice composite and captures two great experiences of the Bosque – the sunsets as well as the wildlife.  What do you think??

Swan Dive (but by a hawk)

Thought I’d share this shot as a change from all the geese and cranes I’ve been showing.  I was slowly driving along inside the refuge when I spotted this hawk in the tree.  I pulled over and just got my camera out the window when he decided he didn’t want my company.  I really liked the definition of the wings and feathers in this image.  Hope you enjoy – Happy Holidays!

Was it something I said??

I’ll stay in the Bosque for this week’s challenge.  When I first got to the refuge, it was in the afternoon and I wasn’t surprised to find the first pond I came across covered by thousands of snow geese.  What I was surprised at was to look across the pond and see a coyote patrolling the edge of the pond.  It turns out that there were actually a pair of them scoping out the feast in front of them.  What I was even more surprised at was that neither of the coyotes ever made a move toward the geese who were less than 10 yards away (in very shallow water).  They sort of walked around the pond for a while and then just wandered off.  I would guess that the geese were surprised also…..

“maybe I’ll just get a burger”…

In case you were wondering about snowgoose takeoffs, they also take a quick step or two as they begin to flap their wings.  This all happens very quickly and it was even more difficult to isolate which geese would take off as there were many more of them and they didn’t exhibit any “tell” like the cranes did by straightening their necks.  Here’s a late afternoon shot that I got of a couple of the last geese taking off before the cranes came back in.

Friday’s post showed some synchronized landing action – today’s photo focuses on the the takeoff of the Sandhill Cranes.  The takeoff is actually harder to get a good photo of.  There are so many Cranes on the pond that it is almost impossible to get one without another 20 cranes in the photo just standing around.  I found the best way to do it was to wait until most of the cranes had already left and then just focus on one of the closer groups and hope they leave while you are watching them.  Luckily, the cranes seem to “point” by straightening out their back and starting to walk forward just before they take off.  If you picked the right group, it is then possible to get an image of them starting to run/hop while beginning to flap their wings and thrusting themselves into the air….  I managed to get this shot of a couple of cranes in various stages of the liftoff with a nicely photogenic crane in the foreground showing us his/her beautiful plumage.  Hope you enjoy.

I’ll stick with the Sandhill Cranes for todays challenge.  I think they fit nicely for two reasons.  They seem to have these large bodies and wings which have to be supported by very delicate, thin legs.  The second reason is the incredibly delicate coordination they exhibit while flying and especially while landing.  This photo shows two cranes landing in amazing ballet synchronization. 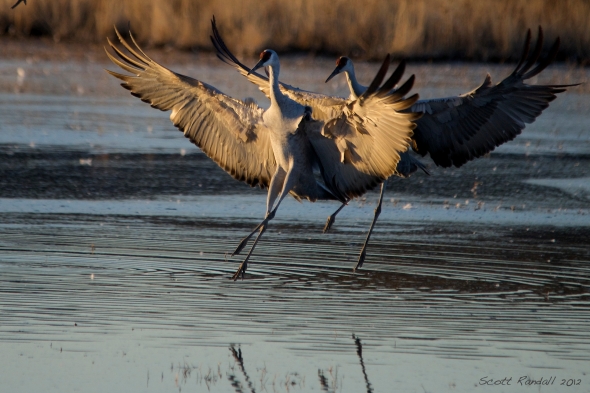 I’ve posted a few photos of the snow geese but haven’t showed the other “headliner” from the Bosque at this time of year.  The Sandhill Cranes are also represented in great numbers (7 or 8 thousand while I was there) and you get used to a sort of routine – first the snow geese do something then the sandhills do something.  For instance, in the morning after the massive geese fly-out, the band of hearty photographers pack up and rush over to the ponds where the cranes  have spent the night.  They begin to slowly fly out in different numbers to begin their day of feeding in the fields.  Here’s an initial shot of two cranes against the sky.  Large and kind of ungainly but also majestic, they are quite a sight as they begin to fill the sky.

Sandhills at opposite ends of their wing flaps….

I don’t know why this image struck me funny but I immediately thought of this caption…..

“Don’t be so impressed – you’re only flashing yourself!!”

Feel free to add your own interpretation…..

Hi everyone – just back from the spectacular change of season phenomena at the Bosque Del Apache in New Mexico.  The coming of the winter season brings the migration of tens of thousands of birds to this incredible refuge.  One of the other things it brings are amazing sunrises and sunsets.  There is a daily ritual for the visiting photographers to get up before the sun to get out to the refuge to photograph first the gathering and then the departure of the snow geese against the dawn colors.  At just before sunrise, the horizon fills with thousands of geese against the vivid colors in the east.  They fly in to join the other thousands of geese already on the “flight deck” pond.   After saying hello to all their friends, they all launch again to go feed in the neighboring fields around the refuge.  Here’s a shot of some of the geese flying in.  It doesn’t really do it justice – picture this across the entire horizon and going on for a solid 20-30 minutes!

The red dawn of the snow geese “fly-in”

Sorry I haven’t posted much this week but I’ve been “on the road again” to the Bosque Del Apache National Wildlife Preserve in the little town of San Antonio, New Mexico.  If you’re not familiar with this place, it is the winter home for tens of thousands of snow geese (52,000 by last week’s official count) as well as 7,000 sandhill cranes and many other species of bird as well as the normal New Mexican wildlife.  I’ll have lots more to post from here but here’s just a quick shot to get you attuned.  This was taken during one of the twice daily mass “fly-outs” of the snow geese.  They rest in the ponds at night for protection from predators and then in early morning (and then again in the afternoon) they all flight out at one time –  quite the sight (and sound)!

Vacationing in the South….