I went for a walk yesterday with our two dogs and ended coming back home walking through the part of Balboa Park that borders our back yard. There is a canyon there that the dogs can run in and you sometimes get surprised by the wildlife there. As we walked on the path, I noticed a beautiful Kestrel sitting in the top of a nearby tree. He was very close and relaxed which is unusual for a kestrel – and me without a camera. I walked up the hill to my house, unleashed the dogs and grabbed my camera and long lens. As I went back down the trail, I could see the kestrel fly away into the large trees surrounding the canyon. I decided to make one quick spin around the area and finally saw the bird again on a telephone pole at the top of the canyon. I climbed my way through the steep underbrush to get close enough for picture and finally got within range. After snapping a few shots, I stumbled and of course the kestrel flew away. I love these great looking little falcons so I was disappointed to not get a shot of it flying. Anyway – thought I’d share the result of my dog walking discovery…. 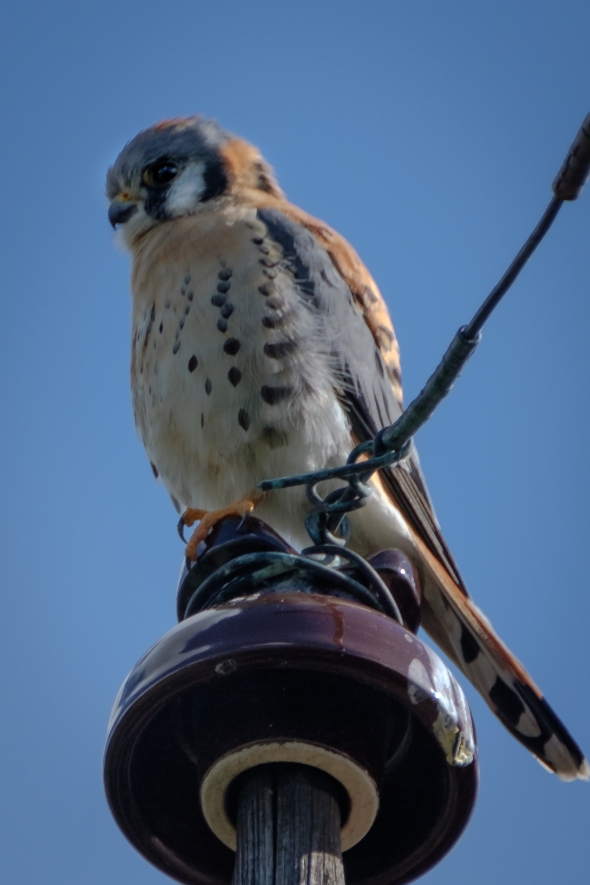 Transition back to a photo blog….

After two days of political observations, I want to get back to sharing photos on this site. For that transition, I thought I’d share some up close and personal iPhone photos from our San Diego march. As you look at these, imagine a person with a guitar walking along side you and the crowd joining in to some of Pete Seeger’s greatest hits…….

A thought for day 2….the good and the scary

Spent the morning with about 30,000 friends at the Women’s March in San Diego.  A wonderful experience – good-natured, peaceful  and thoughtful people expressing their distress at a variety of policies that have been espoused by the new administration.  No rancor or violence, just an expression of concern.  It was crowded but everyone seemed to enjoy the moment and felt as if we were sending a message of unity that was notably absent from the inaugural speech yesterday.

We returned home and turned on the television to watch the coverage on some of the other incredibly large demonstrations across the country and around the world.  Then, something happened–the coverage switched to our new WhiteHouse occupant telling the CIA employees, in front of their wall of fallen heroes, that his feud with the intelligence community was an invention of the dishonest press – despite the fact that most of it had been recorded in Trump’s own tweets!  Then came the really scary part.  We watched the first official press briefing from the White House and were absolutely dumbfounded when the new press secretary YELLED at the gathered press and accused them of knowingly and dishonestly reporting on the size of the inauguration crowd (and the far larger protest crowds) in an effort to downplay Trump’s popularity.  He even directed the press to look at photos for crowd comparisons to the Obama inaugurals – which clearly show much larger gatherings for President Barack Obama.  These two examples of the new administration trying to ignore the facts or change their own written record point to a continuation of the fact-free environment that Trump rode into the White House.  His pivot to a more disciplined presidential demeanor and behavior has yet to appear – as has any attempt or action to satisfy his self stated goal of uniting the country.

I hope he enjoyed the prayer service – he must have missed the parts about humility being a virtue.

A simple thought on today…

As of today, we have a president who has decided that he will not comply with the simple conflicts of interest rules and reviews that every senior manager in the government must follow.  While it is not technically illegal, it is something that could have cost me my job when I was a government executive.  It just fills me with pride that he believes he is above that kind of scrutiny.  Not exactly a great example for a new administration that claims to focus on the needs of the people vs the entitled few.   Just a thought….

To me there is no better example of ambiance than a sunset – especially along the coast or up in the mountains somewhere.  Combined with reflections off the water (in this case, a very low tide) there is nothing better to set a beautiful and colorful mood.  This photo is taken of the crystal pier in Pacific Beach just as the sun sets right on the horizon.  Hope you enjoy the calm and peaceful feeling of this photo on a sure to be tumultuous week….. 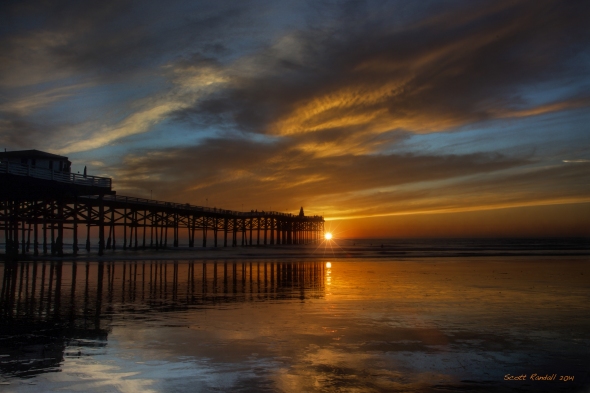 Breath in and smell the salt water…..