This photo was taken at the Ventura harbor earlier this year while we were on our way out to Santa Rosa Island for a few days of camping and hiking.  It was kind of a cloudy morning but the water was very still.  It provided a nice reflection of the sky in the empty boat slips of the harbor.

In my previous post for this challenge I mentioned that I like wildlife photography because it is always unexpected and unplanned.  I thought I’d post this photo of an endangered Channel Island Fox to illustrate that fact.  We had been on Santa Rosa Island for 3 days and I had been out every morning and evening with hopes of getting a photo of these illusive animals.  As we were waiting for our boat to arrive to go back to the mainland, my wife and I were sitting by a small tidal pool watching some birds play in the water.  As we were chatting, I saw movement over her shoulder and I saw a small face (the foxes are about the size of a house cat).  I told Dee to freeze for a second so I could get a shot of this totally unexpected visitor – this was that first photo.  Once again, I relearned that when out in the wild always expect the unexpected….. 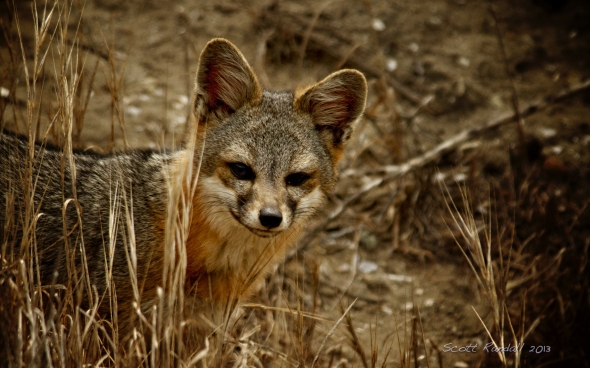 We went out to Santa Rosa Island a couple of weeks ago and spent 4 nights camping.  Every morning, I got up early with the hopes of capturing a photo of a Channel Island Fox.  These little foxes are unique to the Channel Islands (and each island has its own subspecies) and were very close to going extinct.  Until about the 1960s, the islands were inhabited by Bald Eagles who mostly eat fish.  As the Bald Eagle population was decimated by hunting and by DDT poisoning, Golden Eagles moved in from the mainland.  The Golden Eagles feasted on the island fox populations with the Santa Rosa population going down to only 14 foxes .  To save the foxes, they were rounded up and bred in captivity on the islands.  With the recent relocation of the Golden Eagles from the Isands and the reintroduction of the Bald Eagles, it was possible to reintroduce the foxes to the wild.  The foxes are now thriving on the Islands in what is thought to be one of the most successful reintroductions of an endangered species to an area.  The Santa Rosa population is now estimated to be in the range of 500 foxes.  In any case, I was “skunked” during my morning photo walks except for a quick glimpse of a fox as it dove into a nearby canyon.  As happen many times while trying to photograph wildlife, the opportunity came when we least expected it.  My wife and I were sitting in a small canyon and waiting for our boat to the mainland on the last day when I saw this little face coming out of the brush……

I told my wife not to move for fear of it running back into the weeds but he instead came down and spent about 5 minutes with us – getting a drink of water and then returning to the brush.  He didn’t seem very scared of us as he came pretty close but he certainly kept an eye on us for any threatening gestures.  I think this next shot captures how we felt about this incredible way to end our stay on the island……Priceless!

“Have a nice trip home”

I’ve taken various photos of Ravens at different times and places and have always been disappointed in the results.  They are difficult models due to their dark colors hiding the details or the sheen of their feathers blowing out any highlights.  This is probably the best Raven shot I’ve done to date.  There were a number of these amazing birds surfing the air currents off of Santa Rosa island (part of the Channel Islands National Park) about 30 miles off the coast of California, north of LA) where we were camping last week.  I figured with the monochromatic nature of the bird that a Black and White processing might be effective – I added a little blue tint to give it a more “cool” look.   Hope you enjoy it.