I’m late again this week but finally got around to looking at this week’s challenge, “Warmth.”  Warmth always makes me think of Balmy evenings on the beach in a tropical local.  This photo is from Taveuni, Fiji on just such a night.  The storms off the coast cooperated and lit up the skies with a nice display of warm colors.

This is my second response to this week’s challenge”Yellow.”  I took this photo two weeks ago at the Bosque Del Apache, in New Mexico.  This time of year, thousands of Sandhill Cranes migrate to the area for the winter.  They take off from the ponds each morning to dine in the neighboring fields but every night at sunset they return to the ponds for the evening.  This is a typical sight that you see as the sandhills return against the colorful NM sky.

In response to The Daily Post’s weekly photo challenge: “Yellow.”  Whenever I see one of the these Challenges that are color related, I almost always turn to my photos from India.  I found the colors there to be extraordinary everywhere you looked.  I can always find a photo which highlights any color selection imaginable – so a yellow themed photo was easy to find.  This photo was taken in the early morning as the crowds were assembling on the banks of the Ganges River in Varanasi.  Everyone was headed for their morning prayers and baths in the sacred river.  These ladies caught my eye as we passed by because of their stunning yellow saris. 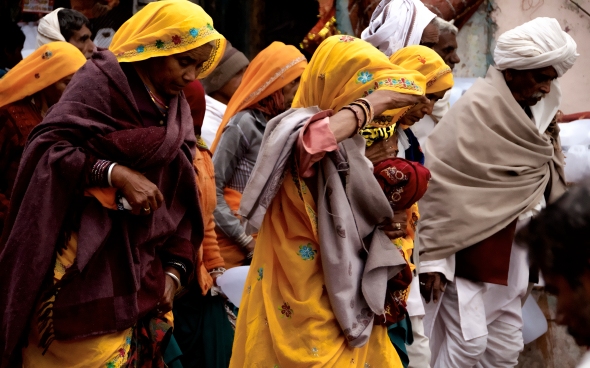 Weekly Photo Challenge: Twinkle – the Charles Bridge of Prague on a rainy night

Here’s my post for this weeks challenge, Twinkle.  While stars twinkle, so do the lights on the Charles Bridge in Prague.  We were out on this dreary, rainy night but there weren’t many other people.  That gave us the opportunity to catch this twinkling scene including the reflections off the cobblestone surface of the bridge.

Twinkle stars on the Charles Bridge

I’m a little late getting to this week’s challenge so I’ll post three different photos to illustrate angularity.  The first is a close-up of a rooftop in Heidelberg, Germany.  I liked the different angles of the rooftop dormers when added to the perspective angularity of the roof itself as it sloped away from my viewpoint.  I also liked the contrast between the angular black dormers and the puffy dark clouds that were building. 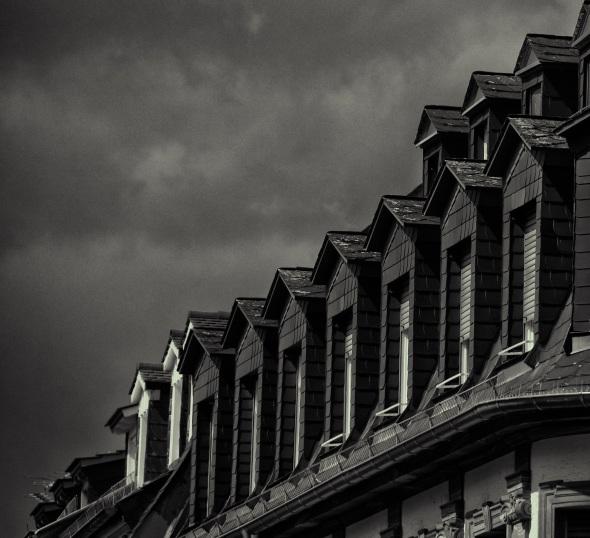 The second photo is a reflection of an old gothic building in the decidedly modern windows of a bank.  The combination of angles and curves caught my eye during an early morning walk (in Wurzburg I think). 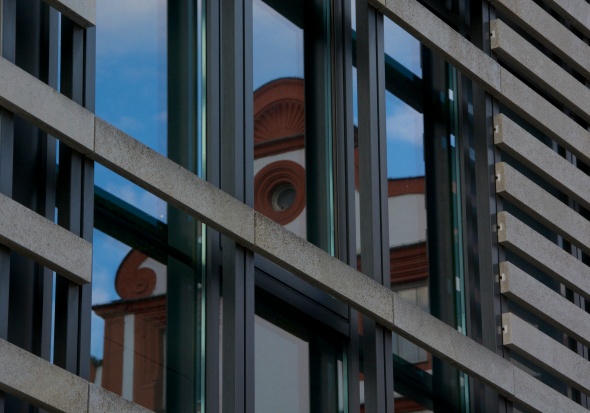 The last photo is from Prague on a rainy night.  The photo captures the angles and architecture of the fortress on the hill, the angles and lights of the Charles Bridge, and the foreground of angled pier posts and supports.  There is also another, less apparent angle where there is a water break and falls in the river.  It was a beautiful night and I was glad to be able to catch this image. 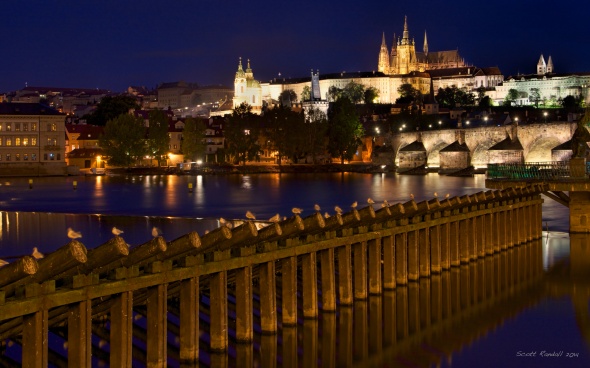 The Angles of a Praha evening

I actually wrote this post a few weeks back (when it happened) but am glad I saved it for this challenge.

“Go for it” my partner said after seeing  his tee shot fading to the right but in good position.  I figured it for about a 250 yard shot to the green at the steeply uphill 12th hole at Mt Woodson golf course in Poway, California. I’ve played this hole dozens of times but have seldom tried to drive the green.  Today was a perfect opportunity – the GPS was reading about 225 yards and there was no wind at all.  I hadn’t been playing particularly well but I knew if I took a good swing I could reach the green and give us an advantage over our opponents.  I tried to remind myself to swing smooth and then just gave it a cut.  It was one of those rare (for me anyway) swings where the ball just “clicks” off the club face and you have the wonderful sensation of watching it soar high, with just a gentle 10 yard bend to the left toward the flagstick so far away.

As we watched, we all knew it was a pretty shot but then we heard a “clang” from 225 yards away as the ball struck the flagpole.  We had no idea where the ball ended up but we were all charged up that it was such a fun shot.  As my partner and I reached the green, the other twosome had walked up the hill to see where the ball ended up.  I heard them say that there was no balls on the green, and when I got up there, none of us saw any ballmarks around the flag.   They finally looked in the hole and yelled “I don’t believe it” and I realized that 36 years of frustration had come to an end – I had finally made my elusive hole in one – on a par 4 no less!!!  A hole in one and what is known as an Albatross all in one swing of the club.  I’ve gotten close to an ace several times over the years but not so much recently.  What a great feeling – the rest of the round is kind of a fog – maybe the result of buying a few rounds of beer for the clubhouse after the round.

Oh yeah – I almost immediately tried to figure out how much I had spent to get to that moment.  I started playing golf 36 years ago at the age of 28.  I guess that I have averaged about 1 round a week for all those years – sometimes more, sometimes less.  I also figured that with equipment thrown in, the average round was probably around $40.  That makes an estimate of $74,880 – the cost of a lower model Porsche – and worth every penny……

I haven’t posted since last week’s challenge but I thought I’d add another photo to that theme.  This fits the description with a desaturated photo and lots of black space in the almost monochromatic photo.  I took this while in Europe.  I was passing from a sunny courtyard through a large portal into another square – I saw this young lady having her photo taken (with a flash) but I thought the natural lighting was better from my vantage point.  I liked the dramatic shadows and the light only highlighting her outline.

I don’t take too many minimalist photos but I found one that almost fits the bill.  I liked this one enough to have it printed and displayed in our outdoor living room as the colors kind of mirror the colors of the “room”.  This was taken with a telephoto lens during our recent trip to Europe.  These two ladies were peering out a window high above the main square in Heidelberg, Germany.  They both had kind of thoughtful expressions on their faces (or maybe they were just bored).  I think the minimalist nature of the photo draws you to those expressions and makes you wonder what was really going on inside those minds……

A penny for your thoughts….

This challenge was easy as I was already working on an image that fits the subject.  I just purchased and received a 24″ monitor and a graphic tablet to use for editing photos – I think I was starting to go blind doing all my editing on my small, portable Macbook Air.  I had chosen a photo of a leopard from Tanzania for my first edits using the new equipment.  Luckily, it happened to be a Leopard descending from a tree so it will also works for this challenge.  I hope you enjoy! 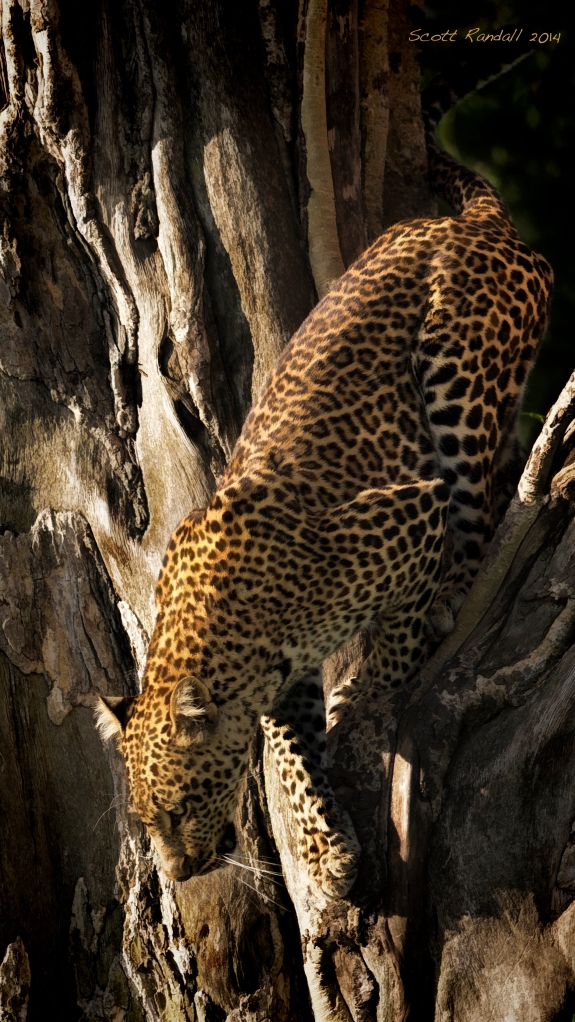 I’m not sure that this is really a great fit for this week’s challenge but I decided to use it as I thought it might make a good album cover.  I also chose it as it was attempt to take a photo and make it more like a work of art.  I took this photo in Yellowstone Park a few weeks back.  This Osprey was sitting at the very top of a tree and decided to take off – nicely into the sun.  I caught a nice sequence of photos but this is my favorite because of the wing positions, the claws, and the eyes of the great bird.  It certainly conveys to me what it might be like to be able to fly…..I fine theme for an album.

Wind beneath my wings